In September we already wrote a post about the evolution wireless G4 series presented by Sennheiser. G4 is a rugged, wireless microphone system, which you can attach to all cameras and is easy to use. It features an integrated intuitive display and the True Diversity receiver. This ensures quick and easy operation. The Wireless Systems Manager software (300 series and 500 series) and the Control Cockpit (300 series) make monitoring multi-channel systems simple and ensure a good workflow.

This series has now been extended to the G4 500P series, which is intended to appeal to professional users in the film and ENG sector.

The all-in-one system, now completely in black, can be used for audio recordings in broadcast quality. But not only the design has changed, the system is supposedly less sensitive to splashing water and high humidity. Another feature is the increased frequency range of up to 88 2MHz. The whole system is available in different international frequency 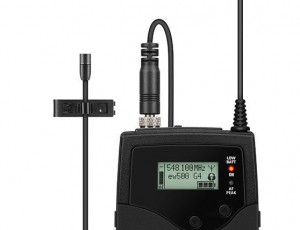 versions from 470 to 938 MHz. The frequencies can be set in the 25 kHz grid or from 20 banks with now up to 32 channels. With the G3 500P, the output power can be selected in three steps of 10, 30 and 50 mW. The G4 series uses all analog transmissions in the form of frequency modulation with a maximum stroke of ± 48kHz and the Sennheiser HDX compander system. The 500P series has a max. transmission range of up to 100 meters and an operating time of up to 8 hours. Transmitter and receiver are fully compatible, which means that both transmitters and receivers of the 100 series can be combined with the 500 series.