With the RX0 II, Sony is launching a miniature camera that shares its compact and robust case with its predecessor, but also has a new image sensor and internal 4K recording.

The RX0 II features a rugged waterproof housing (up to 10m). A special feature of the action cam is the tiltable 180 ° monitor, which allows the user to always keep an eye on his image. The 1.0-type sensor and advanced image processor perform AF with eye detection and soft skin effect. With the internal recording function image-stabilized 4K films can be recorded with 30p. Sony also includes a 1,000-fps recording mode with uncompressed 4K HDMI output. The RX0 II supports S-Log for more flexibility in post-processing. 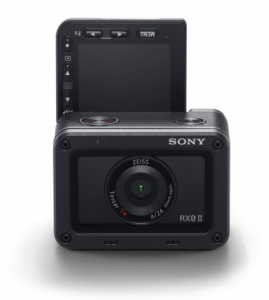 The LC display can be tilted upwards by about 180 ° and downwards by about 90 °, making it ideal for selfies and vlogging, among other things. Since the camera is waterproof and dustproof, the display also works underwater. It includes a microphone jack to allow the connection of an external microphone. The continuous shooting function of the RX0 II can shoot up to 12916 standard JPEG images in succession. The Exmor R 1-inch CMOS image sensor features 15.3 megapixels and a Bionz X image processor that provides a wide dynamic range, reduced noise, natural-looking detail and fine color gradations. The photosensitivity should be at 80 to 12,800 ISO.

For more information about the RXo II, click here.